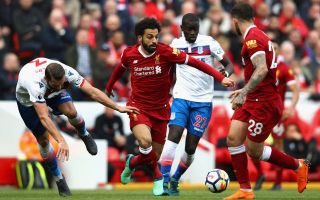 Liverpool were held to a disappointing goalless draw by Stoke City at Anfield on Saturday, and their fans were all furious with the refereeing in the game.

It’s not an ideal result for the Reds, as although they’ve moved nine points clear of fifth-placed Chelsea, the Blues have two games in hand and the two sides play each other at Stamford Bridge next weekend with Tottenham sandwiched in between just four points adrift of the Merseyside giants.

In turn, it could set up a potentially nervy end to the domestic campaign for Liverpool, as they’ll also be focused on their Champions League run with the second leg of their semi-final tie against Roma to come on Wednesday night.

As a result, it’s not a great outcome for Jurgen Klopp and his players, but supporters directed their anger and frustration at referee Andre Marriner and the officials after the full-time whistle, as seen in the tweets below.

There was one particularly controversial moment in the second half involving Erik Pieters, with a cross from the right appearing to strike his arm. Some may argue it would have been harsh as his arm was initially down by his side but as he swung it back to get out the way, it could have been given.

However, Marriner didn’t award the penalty, and Liverpool were left frustrated as they also fell short of the level that they’ve set in recent months in terms of their performance.

Now, it remains to be seen whether or not they will be left to rue this missed opportunity to all-but put the top-four race to bed.

Should have had at least 2 penalties in that game. Typical officiating by the English officials. Good thing they won’t be around to ruin the World Cup.

He had his shirt pulled multiple times and Peiters got away with it. Shite english refereeing

Send this to FA

The Ref was shite! When is there going to be a time when they get pulled in by the FA?? Clueless.