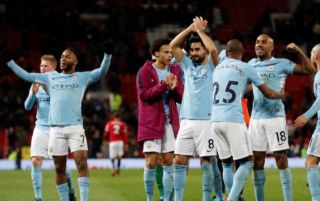 Man City fans took to social media this afternoon to heap praise on England international Raheem Sterling for his amazing performance in his side’s 4-1 win against West Ham today.

The away side opened the scoring in the first half thanks to a goal from Leroy Sane, with their lead then being doubled thanks to a own goal from Declan Rice.

West Ham then pulled one back through Aaron Cresswell, however two more goals from Fernandinho and Gabriel Jesus ended up putting the result beyond doubt.

The win now means that City are just a few goals and wins away from breaking a whole host of Premier League records this season, including most wins, most goals and highest goal difference.

During and after the match, fans took to Twitter to laud over Sterling’s display today, as the England ace bagged three assists in City’s rout this afternoon.

Here are a few select tweets from fans praising Sterling for his stellar display today.

Raheem sterling is ? if he could finish 1 on 1 he would be even more ? pep has done a brilliant job with him

Sterling has been absolutely brilliant today, which will boil the piss of some of our fans.

That is brilliant from Sterling. That's why there's more to his game than 'just' being in the right place at the right time (and that's not easy either, by the way)

Sterling has been amazing today

Raheem Sterling
18 goals 10 assists . Should be in the team of the year what an amazing season