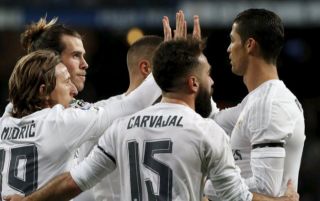 Real Madrid superstar Gareth Bale has been struggling to make his mark in recent times, but a move back to the Premier League could reportedly be in jeopardy.

The Welshman has made 34 appearances in all competitions so far this season, scoring 14 goals and providing eight assists which on the face of it, seems like a decent return and overall contribution.

However, he has been left on the bench two of the last three Champions League games while being hauled off at half-time against Juventus at the Bernabeu, as he has seemingly been used to rest other key players in La Liga with Real Madrid well off the pace and focusing on Europe.

In turn, those kind of indications and numbers will only strengthen suggestions that he could be on his way out of the Bernabeu at the end of the season, but The Express claim that neither Man Utd nor Chelsea may be able to afford him or want to splash out up to £85m on him as Madrid want to recoup a fee close to their initial outlay.

There’s no denying that the 29-year-old is a quality player, but coupled with his injury record during his time in the Spanish capital, it makes him somewhat of a risky signing too, especially with such a fee being touted.

As a result, it would seem logical that both Utd and Chelsea would think twice about making such a move, and so it remains to be seen if he can secure an escape from Real Madrid this summer to secure a more prominent role elsewhere.

Various other facts are also said to be in play according to the Express, most notably Bale’s desire to continue to fight for his place in the Spanish capital which isn’t a great surprise given his trophy haul since moving from Tottenham.

Time will tell if Zinedine Zidane and Los Blancos show more faith in him or perhaps even accept that they’re stuck with him and use him more often especially in the bigger games.