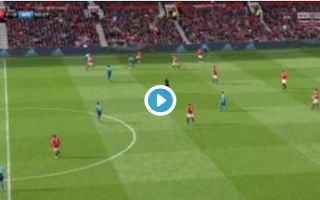 READ ALSO: “Terminate his contract” – Arsenal fans are furious with £35m star vs Manchester United and label him “useless”

Paul Pogba gave Manchester United an early lead after converting from just yards away. Arsenal looked out of ideas heading into the break at Old Trafford at 1-0 down but the Armenian Mkhitaryan capitalised on poor defending from Jose Mourinho’s side.

It goes without saying that today’s fixture will be an iconic date for the history books with it being Arsene Wenger’s last ever visit to Old Trafford to face his arch enemies Manchester United. It is also the Arsenal bosses last encounter in charge of the Gunners against long-time enemy Jose Mourinho.

Mourinho was haunted in the second-half with Mkhitaryan showing the quality that the self-proclaimed special one allowed to depart Old Trafford in January in order to bring Alexis Sanchez into the club.

United failed to clear the ball on the 51st minute and were unable to cope with an oncoming Mkhitaryan who ran at the United back four with pace.

The Arsenal star slotted past David De Gea with composure to draw the tie level but opted not celebrate out of respect against his former side.

Watch the goal below.