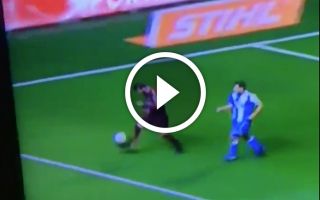 Barcelona were crowned La Liga champions on Sunday night, and Gerard Pique was clearly in the mood to celebrate and enjoy himself even during the game with Deportivo.

The Catalan giants have ultimately won the title comfortably as they needed just a point this weekend but ended up securing a 4-2 win to claim the crown back.

The result leaves them 11 points ahead of Atletico Madrid with four games still to go, while they’ll add the league trophy to the Copa del Rey that they won last weekend.

In turn, it has been a very successful and enjoyable campaign aside from their Champions League exit, and Pique was seemingly keen to revel in the moment, as seen in the video below showing him doing keepy-uppys during the game.

It just goes to show the technical quality that even the centre-halves possess at Barcelona, but Pique has been able to pair his class on the ball with defensive solidity to become a stalwart at the Nou Camp and a fundamental figure in their success.

This season has been no different, and while some may slam his showboating below as disrespectful, it’s still pretty impressive that he had the bottle to even do it during the game.

Barcelona will now celebrate winning La Liga, but the tricks and skills will be put away soon enough as their next objective will be to finish the season unbeaten.