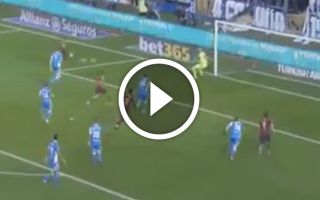 Barcelona needed just a point at Deportivo on Sunday to secure the La Liga title, and Lionel Messi did his part to make it a reality for the Catalan giants.

Philippe Coutinho had given the visitors the lead at the Riazor, before Messi stepped up and doubled their lead with this tidy finish, as seen in the video below.

In doing so, the Argentine icon became the first player to score 30 or more goals in seven La Liga seasons, as noted in the graphic below, before Lucas Perez halved the deficit and set up an intriguing second half.

Despite being set to turn 31 this summer, the Barcelona forward shows no sign of decline as that’s now 41 goals in 51 appearances in all competitions for the season, as he has been a fundamental figure in his side’s success this season.

Barcelona went into the game with a commanding eight-point lead, with nearest rivals Atletico Madrid having just three games remaining, and so a point will be enough to see them crowned champions.

What a goal from Messi and Absolutely brilliant pass by Suárez. pic.twitter.com/PGaXwc3ABi