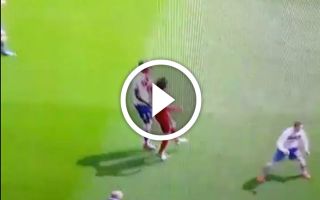 Liverpool winger Mohamed Salah has been in stunning form this season, but replays have seemingly caught him lashing out during the draw with Stoke City.

It was a frustrating afternoon for the Reds, as they were held to a goalless draw by the Potters at Anfield which has led to growing concern and anxiousness over their push to finish in the top four in the Premier League.

Jurgen Klopp’s men are now just six points ahead of fifth-placed Chelsea, who have a game in hand and will host Liverpool at Stamford Bridge next weekend.

In turn, it was far from an ideal result to not see off Stoke, and now the Merseyside giants could be set to see their talisman facing a suspension to end the season.

Salah, 25, has bagged 43 goals in 48 games in what has been an incredible campaign for him, but after being shackled by the Stoke backline, most notably by Erik Pieters and Bruno Martins Indi, it appears as though his frustration got the better of him.

As seen in the video below, the Egyptian international can be seen striking out at Martins Indi after being pressed by the Dutch defender, and it doesn’t look particularly good for him.

It remains to be seen if the FA review the footage and take any action, as given Salah wasn’t booked for the incident as it seemingly wasn’t spotted by referee Andre Marriner, that potentially leaves him at risk of retrospective action.

Salah gets away with punch. Refs love the Scousers. pic.twitter.com/k2GhqNEHxm

Salah is deliberately trying to punch the guy. Ban needed.

Wonder if match of the day will highlight salah’s attempted punch. I am guessing not. — Mike cronin (@mcfcspike) April 28, 2018

So we all need to @ the FA with the clip of that Salah punch, right?

Will be interesting to see if Salah gets a ban for throwing a punch at that player — Alex Benson-Wilson (@alexbw11) April 28, 2018