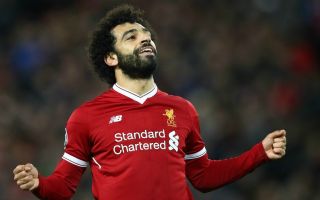 Given Mohamed Salah’s form this season, it’s difficult to really draw comparisons and suggest that any player has been on the same level as the Liverpool man.

With 43 goals and 15 assists in 48 appearances in all competitions, the 25-year-old has been a joy to watch this year as he has been Liverpool’s talisman.

However, when discussing a former Reds player in Raheem Sterling, BBC Sport pundit Garth Crooks believes that the England international could be just as good as the Egyptian winger, if only he was more prolific and clinical with his finishing.

On one hand, he makes a decent point. Sterling does have 23 goals this season and he has been guilty of some big misses along the way which could easily have increased his return for Pep Guardiola’s men while he does have 17 assists too.

Ultimately though, that is the difference. Where Salah has been clinical, and to some degree wasteful too given the clear-cut chances he has spurned on occasion this year, Sterling hasn’t been able to match that.

“Oh if this lad could just finish! If Sterling could keep his head down and strike through the ball he would score 40 goals a season instead of the 23 he has bagged already this campaign,” he wrote in his BBC Sport column.

“The rest of his game has come on so much under Pep Guardiola but his finishing still needs so much work. It’s the only difference between him and Mohamed Salah.”

Crooks isn’t wrong about Sterling’s progression under Guardiola, but Liverpool fans will surely disagree with this for the most part as Salah has put himself at a different level this year and it’s a big thing to say that he simply hasn’t taken his chances as that separates the good from great.

Nevertheless, it’s City who have the Premier League title and League Cup to show for their efforts, although Salah will be hoping to claim the Champions League trophy before the season is over.