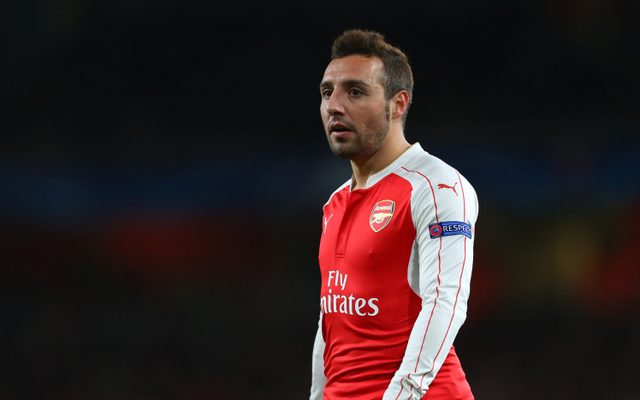 Having not played since October 2016, Arsenal midfielder Santi Cazorla will undoubtedly be desperate to get back onto the pitch as soon as possible.

The classy Spaniard has been blighted by injuries over the past 18 months, which initially started with an Achilles issue which snowballed into various surgeries being required.

There’s no doubt that the Gunners have missed his presence in midfield, as with his ability to quickly switch defence to attack, they’ve lacked a key component in their side which was very effective prior to his setback.

With his current contract set to expire this summer, the 33-year-old will undoubtedly be desperate to get back onto the pitch before the end of the campaign to prove his worth to the Gunners and earn a new deal.

Based on these comments, Arsenal fans may well get a glimpse of him before the campaign is over, but given his recent history of injury problems, Cazorla won’t want to take any risks and will need to do significant work to get his match fitness back given how long he’s been out for.

“I’ve still got some way to go, because after being sidelined for 18 months, everything has to be done in its own time. But the sensations I have keep getting better and I’m feeling optimistic about the future,” he told AS, as reported by Sky Sports.

“The objective is to play some part with the team before the season ends, but we have to take things carefully. All of that must mean that I am doing things right, and I hope to be back as soon as possible.”

It remains to be seen how Arsene Wenger’s departure from the club this summer also affects Cazorla’s chances of securing a new deal, as the French tactician was of course the man who took him to north London.

Nevertheless, if the Spaniard can prove his fitness and show that he can still play a part moving forward, he will hope it’s enough to secure a future somewhere at least to avoid these injury woes from ending his career prematurely.