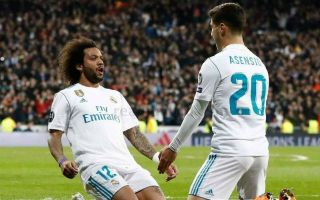 It’s nearly time for the second leg of the Champions League semi-finals as Real Madrid host Bayern Munich in a heavyweight clash.

Bayern took the lead in last week’s semi-final first leg through right-back, Joshua Kimmich, but goals from Marcelo and Marco Asensio gave the holders a 2-1 win to take to the Bernabeu.

Cristiano Ronaldo failed to score for the first time last week in the Champions League this season after his goal was ruled out for a handball.

Bayern have won six Bundesliga titles in a row but must score at least twice in the Bernabeu to stand any chance of reaching the final.

When is Real Madrid v Bayern Munich and what time is kick-off?

Real Madrid host Bayern Munich at the Bernabeu in Madrid, with kick-off scheduled for 7:45pm on Tuesday, May 1.

Is Real Madrid v Bayern Munich on TV? And is there a live stream?

The German champions will also be without Kingsley Coman and Arjen Robben but Corentin Tolisso (shin) and David Alaba (back) are in the squad.

Jerome Boateng (thigh) will definitely miss out after he also came off injured in Wednesday’s game that puts his World Cup place in doubt.

Real have been dealt a blow with the news that Isco and Dani Carvajal will be unavailable for the game, but defender Nacho is in contention.