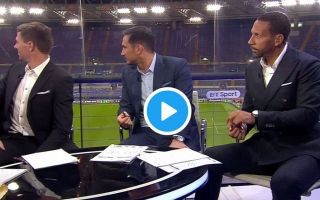 The Reds secured their place in this year’s final against Real Madrid after seeing off Roma in their semi-final tie in a thrilling 7-6 aggregate win.

In turn, they’ll now hope to add a sixth European Cup to the club’s history books, and their run to the final in Kiev on May 26 has seemingly given Ferdinand real reason for concern.

Having spent 12 years at Old Trafford between 2002 and 2014, his allegiance to United is evidently still very strong and so speaking from a rivals perspective, the 39-year-old has raised fears that Liverpool could be starting something special under Jurgen Klopp.

Winning the competition will surely determine that though as if they fall short, it will be a major disappointment that they’ll have to pick themselves up from ahead of next season.

Nevertheless, given the results that they’ve been achieving this season coupled with the progress under Klopp and the prolific attack that he has put together combined with an improving defence on the whole, it certainly does look promising from a Liverpool perspective.

For Man Utd fans, such as Ferdinand, it’s a little less pleasing to see and they’ll be hoping that Jose Mourinho and his players have the response next year to ensure that they remain ahead of their old rivals moving forward.

“He’s ‘boring’ because he trains so hard for these moments.”

“As a Man Utd fan, Man Utd ex-player, it’s frightening. This could be the start.”

Frank Lampard and Rio Ferdinand will never be Liverpool fans, but they recognise how good this team are ? pic.twitter.com/vXOs98SrUs