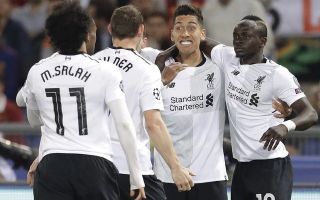 Real Madrid have booked their spot in the Champions League final this season, and Liverpool were well on course to face them on Wednesday night.

Away goals from Sadio Mane and Georginio Wijnaldum gave them a 7-3 aggregate lead over Roma with just 45 minutes remaining in their semi-final tie.

In turn, the focus for many was turning to a potential final clash between Madrid and the Reds in Kiev later this month as it will take an incredible turnaround from Roma to deny Jurgen Klopp’s men.

Naturally, given their bitter rivalry over the years, Man Utd supporters were desperate to see their Merseyside rivals fall short in Europe and not lift a sixth European cup to double their collection.

As noted in the tweets below, they were all looking to Cristiano Ronaldo to be the man to ensure that happens, with the former Man Utd star set to lead Madrid’s charge in the final having had another impressive campaign.

The 33-year-old has bagged 42 goals in 41 games this season, 15 of which have come in the Champions League, and these United fans are praying that he adds to that tally on May 26 and are placing their faith in him to deny Liverpool more glory…

It’s all down to you @Cristiano. pic.twitter.com/HanGKsF1Uy

Inshallah Ronaldo ends Liverpool in Kiev. Can’t have Liverpool on double the amount of Champions League trophies than Man United.

Need Liverpool to be denied 10 clear pens in the final before Ronaldo scores an offside winner with his dick in the 97th minute.

Liverpool going to Kiev just to be thrashed by Ronaldo

Only Ronaldo can stop these c**nts now.. Liverpool winning the champs league is worse than city winning the league for me. Could actually make me ill ?