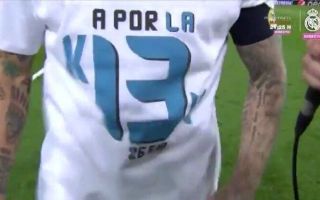 Real Madrid booked their place in this year’s Champions League final after seeing off Bayern Munich, but their post-match celebrations irked some Liverpool fans.

Los Blancos certainly rode their luck at the Bernabeu on Tuesday night, but they eventually prevailed 4-3 on aggregate to see off the Bundesliga giants and secure their place in Kiev later this month.

All eyes will now be on Liverpool’s second leg with Roma at the Stadio Olimpico on Wednesday night, with Jurgen Klopp’s men holding a 5-2 aggregate lead after the first meeting last week.

However, as seen in the tweets below, many Reds supporters were far from impressed with t-shirts worn by the Madrid players after the full-time whistle on Tuesday.

It had the number 13 on it, referring to the fact that the European giants are aiming for their 13th success in Europe’s premier competition.

Unfortunately for them, they’ve got it all wrong. As noted by AS, the t-shirt in its entirety reads: ‘A Por La 13’, which translates as ‘all out for number 13’. In turn, they’re not being arrogant, they’re merely stating the obvious in that they will be going for their 13th European cup.

Further, given the fact that Liverpool haven’t even got past Roma yet, albeit they do hold a strong advantage, if anything, it’s them who are being arrogant suggesting that they will face Real Madrid in the final.

As a result, while some were calling for Klopp to use that in the dressing room as motivation, Eusebio Di Francesco may well be doing the same thing. It remains to be seen who will face Madrid in the final, as they aim to win an impressive third Champions League in a row and their fans were quick to hit back at the Reds faithful as seen below…

Real Madrid players wearing a 13 t-shirt is like when Gattuso touched the Champions League trophy at 3-0 in Istanbul thinking he’d already won it #YNWA #LFC pic.twitter.com/MjUvtLEdFU

Real Madrid celebrating with t-shirts on saying 13, like they’ve won it already. Love all that.

After seeing Real Madrid with their ‘13’ t-shirts tonight, I cannot wait until the 27th of May when Liverpool tear them a new one #AllezAllezAllez

Real Madrid have already got no 13 shirts printed. I think that is awesome they are underestimated us so much. Thinking they have it won.

Real Madrid have already printed the ‘13’ tshirt if I was a Liverpool fan/player that would really be the incentive to win..kind of disrespectful to show the ‘13’ T shirt now

Real Madrid celebrated winning the semi-final with shirts that said “To the 13th”.

Arrogance at its finest. pic.twitter.com/HIavEB41OX

Arrogance why? That’s mean we will fight to win the 13th.

Lol. Liverpool is not yet in the finals and you people are blaming real Madrid’s celebration. First defeat roma and earn place in the final.

Literally means ‘Let’s go for the 13th’. I don’t see where’s the arrogance there.

2014, 2016, 2017 semifinals and none of our rivals in the final complained about that. Inferiority complex, Liverpool. pic.twitter.com/Mdy3gnsmdx

Arrogance is to think you’re in the final.

@AnfieldExpress embarrassing. It literally just means “let’s go for the 13th”…expressing desire, excitement and ambition. Arrogant is however, to think you are in the final when there is 90 minutes left.

Whining about the content of a t-shirt that you can’t even translate properly.
Arrogance at its finest.