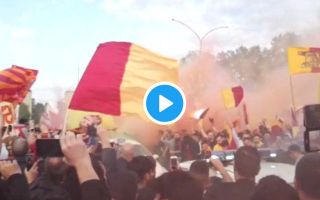 Roma take on Liverpool in the second leg of their Champions League semi-final tie on Tuesday night, and the home faithful were in great spirits ahead of kick-off.

The Italian giants have it all to do if they’re to secure a passage to the final in Kiev later this month, as they start 5-2 down after the first leg at Anfield last week.

Nevertheless, as they showed against Barcelona in the quarter-finals, they’re capable of stunning comebacks, as they now need the same scoreline this time round if they are to progress.

Liverpool fans have made plenty of headlines for their welcome of the team bus in the last few visits of opposing sides to Anfield this season, and as seen in the video below, it’s quite the spectacle when it comes to them welcoming their own players en route to the stadium.

The Liverpool team bus arriving at Anfield. The AS Roma bus was diverted away from the route in which the Man City bus was pelted with objects before the last European match here. pic.twitter.com/RhqffbUQg4

It turned a little sour when it came to the Man City bus in the quarter-finals, but the Roma fans have shown that they are equally as capable of giving their players the perfect welcome to prepare them for a huge game.

The odds are certainly stacked against the Serie A outfit given the outcome of the first leg, but if their win over Barcelona hasn’t filled them with belief that anything is possible, then nothing else will.