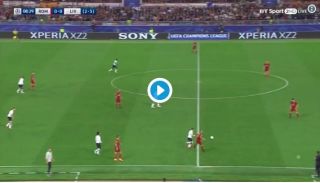 Liverpool wasted little time in taking complete control of their semi-final tie against Roma as Sadio Mane scored early on to open up a 6-2 aggregate lead.

The Reds were leading 5-2 after the first leg at Anfield last week, and a terrible Radja Nainggolan error allowed them to get at the Roma backline.

Roberto Firmino kept his composure to slide in a perfect pass for Mane, who took care of the rest and produced a quality finish to beat Alisson and silence the home faithful, as seen in the video below.

That could be a crucial strike for the visitors, but James Milner’s own goal just minutes later gave Roma renewed hope to still leave them nervous.

Nevertheless, Liverpool were always going to be a threat on the counter attack with the pace and movement they have in the final third, and it promises to be an uphill task for Roma regardless of the early drama.

It also ends a proud run for the Serie A giants, as they hadn’t conceded a single goal at home in the Champions League this season. Mane ensured that that record wasn’t intact for long on Wednesday night…

“AS Roma haven’t conceded at home in Europe all season.”