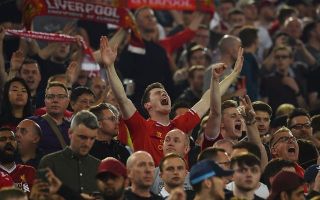 Liverpool saw off Roma in a thrilling Champions League semi-final tie this week to book their place in the final in Kiev against Real Madrid on May 26.

The travelling Reds were out in their numbers in Rome as they celebrated long after the full-time whistle in the Stadio Olimpico after a 7-6 aggregate triumph over the Italian giants.

Meanwhile, Real Madrid overcame Bayern Munich in their semi-final encounter and they will now go for their third straight Champions League success.

However, fans of either club hoping to get tickets for the showpiece event in the Ukraine are seemingly set to be left disappointed after it was revealed how many tickets would be allocated to fans from both Liverpool and Real Madrid for the game.

According to BBC Sport, both sets of supporters will receive just 16,626 tickets each, despite the fact that the attendance on the night at the Olympic Stadium will be 63,000.

The rest will be given to other fans, corporate partners and the media among others, and naturally, that hasn’t gone down well with the Liverpool faithful as seen in the tweets below.

Having followed their team around Europe this season, many are now likely to be left disappointed, and it has led to further criticism of UEFA.

Ultimately, the most important thing for Liverpool, Jurgen Klopp and the supporters, and the same can be said in contrast for Real Madrid, is that they go on to win the competition having come so far.

Unfortunately though, based on these figures, there won’t be as many of their supporters as either club would have liked and there will always be the threat of tickets being sold for extortionate prices which some desperate fans will be willing to buy.

so the stadium has a capacity of 70,000 and liverpool and real madrid are both getting just over 16,000 tickets each, what an absolute joke

Out of 63,000 tickets for the Champions League final, Liverpool & Real Madrid will received just over 16,000 tickets each…

That means just short of 30,000 tickets will be going to corporate and worldwide fans

Absolute bollocks by @UEFA @ChampionsLeague give more seats to real fans than your rich friends!

Pathetic as always! The bulk should be available for the genuine fans