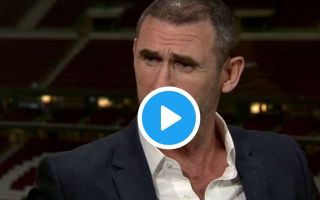 Arsenal were disappointing in their defeat to Atletico Madrid on Thursday night, but Martin Keown was absolutely furious with Mesut Ozil.

The Gunners crashed out of the Europa League 2-1 on aggregate to the Spanish giants, as they fell to a 1-0 defeat at the Wanda Metropolitano in the second leg.

Despite getting themselves in dangerous positions to create chances, they were unable to take advantage and make them count and it was a particularly frustrating night for Ozil who couldn’t find a decisive touch to create an assist despite being in great areas to do so.

However, it wasn’t just that which seemingly ruined Keown’s mood, as he launched a scathing attack on the German international’s work ethic and tracking back to put in a shift for his teammates while also insisting that he has to be a leader by demanding the ball and making things happen instead of shrinking.

Fellow pundit Jermaine Jenas made a fair counter-argument in that it’s not part of Ozil’s make up to do the so-called dirty work, and he isn’t asked to do that for Germany or previously for Real Madrid.

Nevertheless, Arsenal simply aren’t good enough to allow him to have a free role without defensive responsibilities and Keown was very harsh in his criticism, even suggesting at one point that Ozil ‘wasn’t fit to wear the shirt tonight’, as seen in the video below.

It remains to be seen what impact Arsene Wenger’s exit at the end of the season has on the creative playmaker, but Keown is certainly not impressed and will be expecting a major jump up in quality in order to have his opinion changed it seems.

“That fella is NOT kidding me. That is NOT a proper performance. He’s NOT giving everything!” ?

Martin Keown is absolutely livid with what he’s seeing from Mesut Özil… ? pic.twitter.com/nk73hG3DZ8