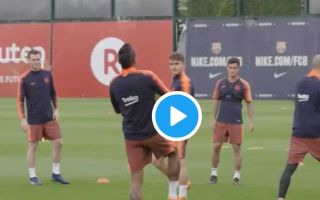 Barcelona have already wrapped up the La Liga title and the Copa del Rey, and their players are seemingly starting to enjoy themselves.

The Catalan giants still have El Clasico this weekend and so they’ll be keen to have even more reason to celebrate after Sunday night.

SEE MORE: ‘I won’t go to war with club’ – Barcelona ace admits to frustration, but will remain patient

However, with two major domestic trophies in the bag, they can afford to relax a little and have fun in training, and based on the video below, they’re certainly doing that.

Philippe Coutinho pulled off a cheeky little nutmeg on Luis Suarez as the Uruguayan was the man in the middle trying to get the ball back. While that in itself was decent, the reaction from their Barcelona teammates was priceless.

As seen below, they absolutely loved the embarrassing moment for Suarez, who looked pretty red faced after the Brazilian’s trick. Denis Suarez and Andres Iniesta may still be marvelling over it as we speak…