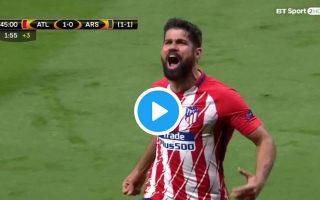 Arsenal were once again undone by former foe Diego Costa as Atletico Madrid broke the deadlock in the second leg of their Europa League semi-final tie.

The Gunners were wasteful in good situations early on at the Wanda Metropolitano, as Arsene Wenger knows his side must score after they conceded an away goal at the Emirates last week and will be looking for more quality and a clinical edge in the final third.

However, Costa gave the hosts the momentum heading into the half-time interval as he shrugged off Hector Bellerin, who was caught badly out of position in the build up to the goal, before keeping his composure to slot home past David Ospina.

As noted in the graphic below, the Spaniard evidently enjoys playing Arsenal as after his stint at Chelsea coupled with Thursday night’s strike, that’s now four goals in seven appearances against the Gunners.

Whether or not it proves to be decisive remains to be seen, but ultimately the situation hasn’t changed a great deal for the visitors as they know they still have to score at least one goal. Nevertheless, given the timing of Costa’s effort coupled with the early setback of losing Laurent Koscielny to injury, it’s not quite going to plan for Wenger’s side.

The worst time to concede a goal!

Diego Costa puts Atlético ahead on the stroke of half time! pic.twitter.com/tDMoiJG00C

Diego Costa has now scored four career goals vs. Arsenal; against no English side has he scored more.

Just had to be him. pic.twitter.com/BAcQ1D4NfB