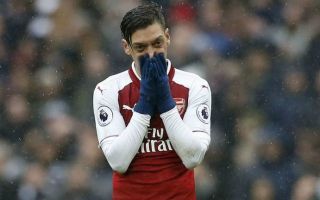 Arsenal manager Arsene Wenger says he does not agree that Mesut Ozil didn’t give enough in his performance against Atletico Madrid following heavy criticism from Martin Keown.

The ex-Gunner tore into Ozil for a lacklustre display in his post-match analysis on BT Sport, but Wenger doesn’t feel it’s a fair assessment of the effort the Germany international put in.

MORE: Arsenal have crucial revamp plans to address major weakness in current side

Ultimately, Arsenal fans will be justified in feeling disappointed that their side couldn’t produce a better performance in such an important game as Atletico knocked them out of the Europa League semi-final.

This guarantees no Champions League football for Arsenal next season and no final piece of silverware for Wenger before he steps down as manager at the end of the season.

It’s games like this Ozil should be able to contribute more, even if others around him were equally disappointing on the night, but Wenger was quick to defend the 29-year-old.

‘I don’t agree (that he didn’t work hard). I think you will see that when you analyse his physical performance that he gave a lot tonight,’ Wenger is quoted in the Metro.