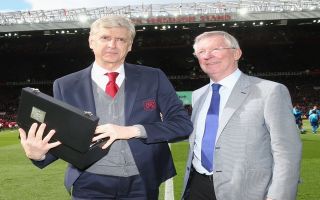 Arsenal host Burnley at the Emirates this weekend and there is set to be emotional scenes as Arsene Wenger takes charge of his last home game.

The Gunners will be hoping to give Wenger a last home victory after they suffered Europa League heartache as they were knocked by Atletico Madrid.

Arsenal plan on holding a series of special events to pay tribute to the Frenchman for the service he has given the club over the past 22 years.

Is Arsene Wenger’s last home game against Burnley on TV?

However, fans will be surprised to know that the actual game is not being televised.

Instead, Sky Sports will dedicate the final hour of this week’s Super Sunday coverage to Arsene Wenger’s last home game in charge of Arsenal against Burnley, according to the Evening Standard.

They reported that the final hour of the show will be dedicated to Wenger with a show titled ‘Merci Arsene’.

The show will show the key moments taking place at Emirates Stadium as Arsenal supporters, former players and grandees say their goodbyes.

The reason the match is not being televised is because Sky Sports confirmed they were screening Chelsea’s match with Liverpool on April 5, which was 15 days before Wenger’s shock statement that he would step down as Arsenal manager at the end of the season.