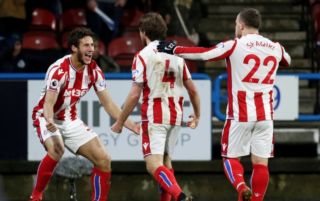 Stoke battled for a goalless draw against Liverpool last weekend – however – another other than three points will see them favourites to go down.

Meanwhile, it’s been happy days for Crystal Palace with Roy Hodgson turning Eagles’ fortunes around after they were sitting at the bottom of the league when he took over as manager.

They appear to be all but clear from the drop as they sit in 11th place after putting five past former Premier League champions, Leicester City, last weekend.

Palace have displayed brilliant form in April with two wins and two draws – with Wilfried Zaha in particular starring.

When is Stoke vs Crystal Palace and what time is kick-off?

Stoke City host Crystal Palace at the bet365 Stadium with kick-off scheduled for 12:30pm on Saturday, May 5.

Is Stoke vs Crystal Palace on TV and is there a stream?

The match will be televised live on Sky Sports Premier League and Sky Sports Main Event from 12pm.

The Potters will be without goalkeeper Lee Grant, who has been out of action with a wrist injury.

Meanwhile, Bruno Martins Indi (groin) is out, while Eric Maxim Chuopo-Moting (groin) is likely to also miss the game.

Glen Johnson (groin) is a slight doubt and Jese Rodriguez has been granted compassionate leave until the end of the season, according to the BBC.

Rodriguez has not featured for the first team since March.

As for the Eagles, Bakary Sakho, Jason Puncheon and Scott Dann are sidelined for the season.

Connor Wickham missed training on Thursday with a calf injury, but he was not expected to be involved anyway after a lengthy layoff.