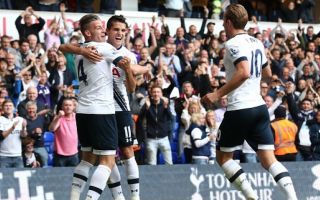 Mauricio Pochettino’s men are only a point behind the Reds after they defeated Watford on Monday night.

West Brom are undefeated since Darren Moore took as caretaker manager but they must beat Tottenham to keep their slim hopes of Premier League survival alive.

The Baggies have taken eight points from their last four games under Moore.

However, the damage was done before he took over from Alan Pardew and they will be relegated if they fail to beat Spurs.

They will go down also if Swansea pick up three points at Bournemouth, or if Southampton win at Everton.

When is West Brom vs Tottenham and what time is kick-off?

West Brom host Tottenham at the Hawthorns with kick-off scheduled for 3pm on Saturday, May 5.

Is West Brom vs Tottenham on TV and is there a live stream?

Mousa Dembele (knock) is a slight doubt after being forced against Watford.

Danny Rose (groin) could feature at the Hawthorns but is still a slight doubt, while Tottenham are hopeful that Harry Winks (ankle) will feature before the season ends.

As for the Baggies, Nacer Chadli (fitness) could face his former club, but Gareth Barry (knee) and James Morrison (calf) are out and likely to miss the remainder of the season.