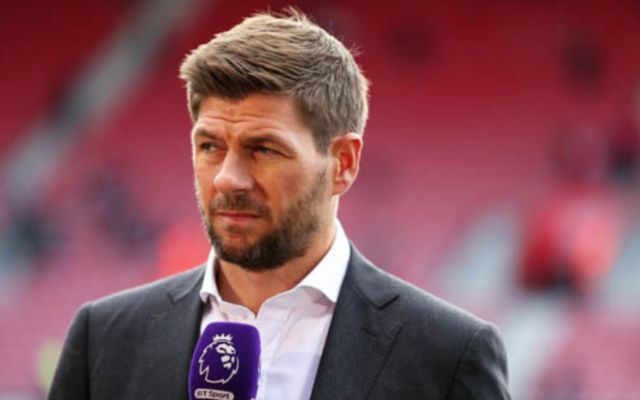 Liverpool legend Steven Gerrard has been announced as the new Rangers manager this afternoon, leaving his role as Reds Under-18s boss.

The 37-year-old is set to make the step up to his first senior management role after retiring from a legendary playing career in 2016 to move into both coaching and punditry with BT Sport.

Gerrard looks a relatively risky appointment by Rangers due to his lack of top level experience, but Liverpool fans will no doubt be excited to see how their former favourite does at Ibrox as they’ll no doubt keep an eye on him as a future manager at Anfield one day.

For now, however, it’s fair to say the former England international is being trolled by a number of users on Twitter as he’s set to renew his rivalry with Celtic manager Brendan Rodgers, whom he worked under at Liverpool.

Gerrard notably slipped at a crucial moment as Liverpool conceded the opening goal in a 2014 defeat to Chelsea that is now widely seen as having cost them their chance of winning the Premier League title that season.

Having cost Rodgers the title that year, fans are now joking that he could do so again in his capacity as Rangers manager!

I think the Rangers board misinterpreted how Steven Gerrard has previously cost Brendan Rodgers a premier league title in the past..? #SlippyG pic.twitter.com/quakoepv0u

Hopefully Gerrard screws Rodgers out of another title

Gerrard has the experience of destroying the title ambitions of Brendan Rodgers. That is what Rangers board admires the most.

Ahhhhh Gerrard has gone Rangers. Now we got a title race next season in the Scottish league. Rodgers meet your destiny. If there's one man that can take him down, that man is definitely Gerrard, since he's already done it in 13/14.