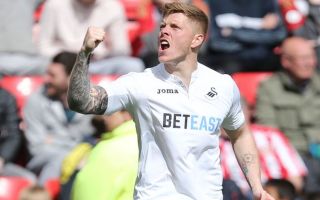 Today will see Bournemouth and Swansea go head to head for three points in the Premier League.

Swansea’s six-game winless streak has put them back in real danger of relegation and they have failed to score on four occasions in that run.

They will hope to get something away at the Cherries and their crucial final home games against relegation rivals Southampton and Stoke.

Last weekend, they were narrowly defeated to former champions, Chelsea, after Cesc Fabregas scored early on.

They have won just once in their last 10 games and are currently 12th in the league, but finished three places higher at the end of the last campaign.

Joshua King has scored three goals in his last five Premier League appearances for the Cherries – so will look to continue his form.

When is Bournemouth vs Swansea and what time is kick-off?

The match will take place on Saturday, May 5 at the Vitality Stadium.

It will kick-off at 3pm.

Is Bournemouth vs Swansea on TV and is there a live stream?

However, highlights will be available to watch on Match of the Day at 10.25 pm.

Adam Smith is expected to return from injury for Bournemouth next month.

Tyrone Mings has stepped up his rehabilitation and was an unused substitute at Southampton last weekend.