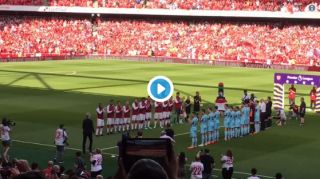 Arsenal manager Arsene Wenger was given a classy send-off at the start of today’s game against Burnley – his last one in charge of the Gunners at the Emirates Stadium.

The French tactician entered the pitch to a guard of honour from Arsenal and Burnley players, and fans around the ground rightly gave him huge cheers and applause for his final home game.

MORE: ‘Sell the prick’ – Arsenal fans left fuming with key Gunners star, claims ace is faking injury to be left out of squad

Gooners have been divided over Wenger’s position for some time now, with the club nowhere near as successful in the second half of his reign as in his first.

Still, that was all rightly put to one side today as Arsenal fans paid tribute to surely their greatest ever manager.

Arsene Wenger gets a guard of honour and a standing ovation as enters the Emirates pitch for his final home game. pic.twitter.com/F8N0lir5hH

Wenger recently announced he’d be stepping down at the end of this season after 22 years in charge of Arsenal, and it’s not yet known who will replace him in north London.

For now, however, the focus is simply on giving the 68-year-old a final home game to remember to ensure he goes out on a high at a club he’s dedicated so much of his life to.