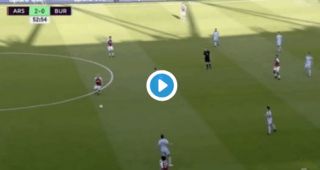 Arsenal midfielder Jack Wilshere may have just shown in one short highlight precisely why he needs to go to the World Cup with England this summer.

The 26-year-old has had a decent season back at Arsenal after spending last year on loan at Bournemouth and failing to particularly catch the eye.

Wilshere is now heading towards the end of his contract at the Emirates Stadium but showed his class today with a superb piece of individual brilliance to set up Sead Kolasinac’s goal for Arsenal to go 3-0 up against Burnley.

In Arsene Wenger’s last home game in charge, the watching Frenchman will no doubt have been thrilled to see such a brilliant moment of quality from a player he’s invested so much trust in down the years.

Wilshere had had his problems with injuries and been in and out of this Arsenal side, but on his day he’s capable of decisive moments like this that show he’s a valuable asset to any top side.

Side-stepping an opponent in midfield before driving forward and picking out a perfectly-weighted pass, Wilshere genuinely looked like Lionel Messi with this wonderful piece of play:

Gif: Fantastic run & pass from Wilshere to set up Kolasinac, who drives the ball past Pope in the Burnley goal! 3-0! [@ArsenalEdits___] #afc pic.twitter.com/LqRg4LHrup