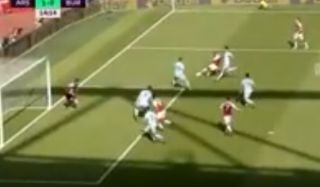 Pierre-Emerick Aubameyang’s tap-in has given Arsenal a 1-0 lead over Burnley in Arsene Wenger’s last home game in charge of the club.

Alexandre Lacazette and Aubameyang have looked a fine partnership of late and they combined again here as the former’s cross whipped along the face of goal was tapped home by the latter.

Here’s a clip of the goal below, with Aubameyang showing those fox-in-the-box instincts that made him such a prolific scorer during his Borussia Dortmund days.

Aubameyang has also started well in an Arsenal shirt, netting seven goals in his first 12 games for the Gunners to make a fast start to life in the Premier League.

There should be even more to come from Aubameyang next season once he’s fully settled in his new surroundings and with his new team-mates, but the early signs are very promising.

The Gabon international won’t ultimately spend long working under Wenger but could give the Frenchman the perfect send-off at the Emirates Stadium this afternoon if this goal proves decisive.