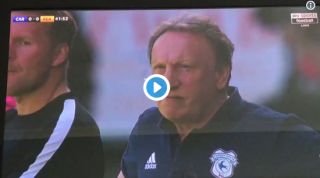 Cardiff City cemented automatic promotion to the Premier League this afternoon after a 0-0 draw at home to Reading, but one bizarre incident has rather stolen the headlines.

Coming towards the end of the first half, Reading took a throw-in, but bizarrely failed to notice they hadn’t in fact crossed the touch line but just a line of shade on the pitch!

Even more bizarrely, no one else noticed either, with play going on as normal.

Watch below for what is truly one of the weirdest moments of the whole footballing season:

Did anyone else just see this in the Cardiff game? Throw in from the shadow line rather than the actual touch line?? Nobody picked up on it! pic.twitter.com/sWWSJukHbK

Cardiff won’t be too bothered, however, as their victory guaranteed them second spot in the Championship as they join Wolves in the top flight for next season.

Fulham had the chance to overtake them this afternoon but will have to make do with a playoff spot instead as Neil Warnock wins top flight promotion once again.

The veteran manager has eight promotions to his name in his managerial career now – a hugely impressive record and one Cardiff will hope can also be translated to a decent stab at Premier League survival next term.

The Welsh side lasted just one season in the Premier League when they were last in the top division in the 2013/14 season.