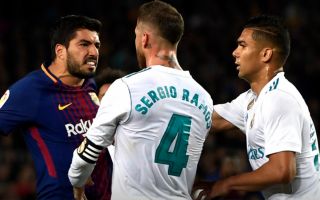 Lionel Messi and Cristiano Ronaldo both bagged a goal each tonight, as Barcelona stretched their unbeaten record in La Liga to 42 games with a 2-2 draw against fierce rivals Real Madrid at the Nou Camp.

Barcelona opened the scoring in the 10th minute thanks to a fantastically worked goal that was finished off by none other than Luis Suarez.

Real then equalised with a tap-in from Ronaldo, with Messi then putting the Blaugrana ahead just after half time, with Sergi Roberto being showed a straight red just before the break.

Bale then found another equaliser for Los Blancos in a match that was enthralling from start to finish.

So, we here at CaughtOffside have selected the Good, the Bad and the Awful from an encapsulating El Clasico tonight.

Lionel Messi was, as he always is, on a different level tonight, with the Argentine bagging an absolutely stunning strike to put the home side ahead just after half time, something we’ve seen him do time and time again throughout his more-than-illustrious career.

The Barca superstar was at the heart of everything good for the home side tonight, with Messi proving to be the biggest threat on the pitch despite his side being down to 10 men for most of the match.

Following this result, Messi will be hoping he can replicate the form he showed tonight in Barca’s next three games to help them secure the first ever unbeaten La Liga season.

Ronaldo's world class but he's not quite Lionel Messi.

The refereeing for tonight’s match was, to put it lightly, absolutely shocking. With the referee Alejandro Hernandez, correctly, sending off Sergi Roberto in the first half, the Spaniard has a shocker for the rest of the match.

Hernandez should’ve sent off Bale for two yellow cards in the first half, with him also denying Madrid two penalties in a match that’ll be looked back in a negative light by some due to the decisions made by the official.

Gareth Bale, who albeit saved the match for Los Blancos, should’ve been sent off in the first half for an absolutely horrible challenge on Frenchman Samuel Umtiti, especially seeing as he’d already been booked for a poor challenge earlier in the game.

The knee-high challenge the Welshman delivered to Umtiti was something that would see him get sent off nine times out of 10, however this time for Bale, he had lady luck on his side.

Roberto got rightly sent off for flailing at Marcelo… but nothing for Bale stamping on Umtiti's calf?