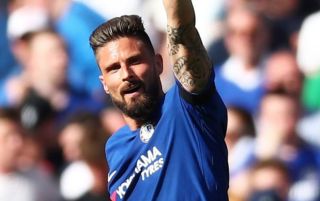 An Olivier Giroud header was enough to separate Chelsea and Liverpool this afternoon, with the Blues edging past the Reds 1-0 with a win that sees them now firmly back in the race for Champions League qualification.

The only goal of the game came late in the first half, as a cross from Victor Moses was nodded home by former Arsenal star Giroud to give the Blues a lead they eventually hold on to come full time.

The win now means that Chelsea lie just three points behind their opponents with a game in hand, which if they were to win that, would see them go level on points with Jurgen Klopp’s side.

Following the result at Stamford Bridge, we’ve picked out the Good, the Bad and the Breathtaking from the Blues deserved win this afternoon.

Chelsea star N’Golo Kante was absolutely superb in the middle of the park for the home side today, with the French international rarely misplacing a pass for the Blues.

The former Leicester star proved during his time with the Foxes that he is capable of rubbing shoulders with the best players in the league, and he definitely proved that today, as his immense physical prowess and ability to intercept passes helped keep Mo Salah and co at bay the entire match.

If Kante proved one thing today, it’s that he’s certainly not lost any of his ability this season despite Chelsea’s below par campaign. What a player.

This fan certainly seems to agree with our praise for Kante’s performance today!

Kante is fucking quality, wins everything loses nothing. 30 mil what a fucking steal.

Now, for how good he’s been this season, Mohamed Salah is still not exempt from criticism, and that’s exactly what he deserves today, as the Egyptian forward just didn’t seem to be at the races for Jurgen Klopp’s side this afternoon.

Despite scoring 43 goals in all competitions this year, Salah just didn’t look capable of breaking down the Blues’ defence today, with Azpilicueta, Cahill and Rudiger all doing their upmost best to prevent the Reds goal-machine from scoring against his former club for the second time this season.

This fan certainly made his views on Salah’s performance clear on Twitter during the game.

Salah has been poor today

For Giroud to lift his header over Simon Mignolet from such an uncomfortable angle took a large amount of skill, so much in fact, you’d have though you were watching Cristiano Ronaldo for a moment.

It one thing’s for certain, there aren’t many better headers of the ball in the country than the Frenchman, and that’s just a fact.

Great goal all round – ball from Bakayoko, cross from Moses and lovely header by Giroud