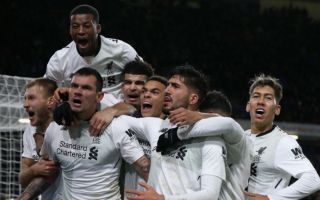 Liverpool fans took to social media this evening to demand the club get rid of youngster Dominic Solanke following his performance in their loss against Chelsea.

The only goal of the game came just before half time, as a fine header from Olivier Giroud following a great cross from former Liverpool loanee Victor Moses.

Liverpool constantly struggled to break the home side down during the match, with the likes of Solanke, Mo Salah and Roberto Firmino’s efforts all coming to no avail.

Following and during the match, Reds fans took to Twitter to hammer Solanke for his below par performance at Stamford Bridge this afternoon.

We feel it’s a bit harsh for fans to slate Solanke given his lack of regular first team football for Liverpool thsi season, however it seems like Reds fans don’t feel the same way.

Here are a few select tweets from fans slating Solanke for his performance in his side’s loss today.

Solanke is a fuckin retard!!!

Why did we buy solanke? He offers nothing man. That’s an easy sell in the summer

Solanke is the biggest piece of shit I've ever seen in my life! It's easy to see why Chelsea were so willing to sell him… #CHELIV

please sell Solanke for next season , we will win the next game

Sell Solanke. Actually don’t, just give him to someone, and in the likely situation no one wants him, pay someone to take him off our hands #LFC #Liverpool