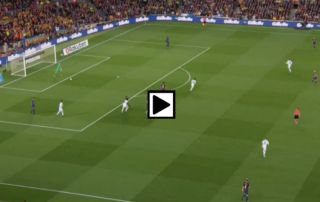 Barcelona went down to 10 men in the last El Clasico of the season today, as Sergi Roberto was sent off for an altercation with Marcelo.

Just before half time, the Spaniard looked to hit the Brazilian defender, with referee deciding to send the midfielder-turned-defender off for the incident.

Barcelona had taken the lead through Uruguayan forward Luis Suarez after Roberto delivered a brilliant cross to the former Liverpool star.

Real Madrid then hit back through their talisman Cristiano Ronaldo, who bagged an easy tap-in following a header back across goal from Karim Benzema.

With the Bluagrana now down to 10 men, only time will tell if they are able to see the game and maintain their 43-game league unbeaten streak, which has lasted for over a year.

Here’s clip of the incident in question. What do you make of it? Do you think it was the correct decision to send Roberto off? Let us know below.