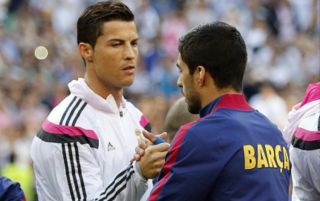 Cristiano Ronaldo cancelled out a fine goal from Luis Suarez to make the last El Clasico of the season an exciting one to say the least.

Suarez opened the scoring with a finely-executed volley in the 10th minute after a superb cross from Sergi Roberto.

The Portuguese superstar then equalised just a few minutes later after a header from Karim Benzema was turned in by him in the middle of the goal.

Having lost 3-0 to the Blaugrana earlier in the season, we’re certain that Ernesto Valverde’s side will be desperate not to lose again to the Spanish champions this evening.

Los Blancos will also not be wanting to take any chances with injuries in the match, as Zinedine Zidane’s side have a massive game in the Champions League final coming up later this month.

Here are the clips of both Suarez’s and Ronaldo’s goals this evening. Both fantastic finishes in a match that looks as if it’s going to be equally as exciting.