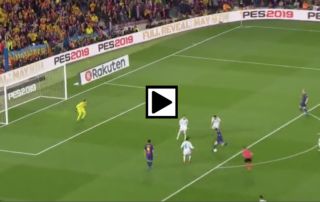 Lionel Messi bagged his 26th El Clasico goal this evening, as the Argentine superstar scored a blinding goal against Real Madrid to give Barcelona a 2-1 lead.

The goal came after some fantastic pressing from Luis Suarez allowed the former Liverpool star to play in Messi, who did what he does best.

The strike was Messi’s 44th of the season in all competitions, a total that puts him ahead of both Mohamed Salah and rival Cristiano Ronaldo.

Should Barcelona hold on to this lead, it’ll surely give the Blaugrana a golden chance to become the first side ever to go an entire league season unbeaten in Spain’s top flight.

Real Madrid may be prone to be fatigue during the match, having just played a thrilling tie against Bayern Munich in the Champions League in midweek.

Here’a s clip of Messi’s stunning goal this evening. What a player he is. The best ever.