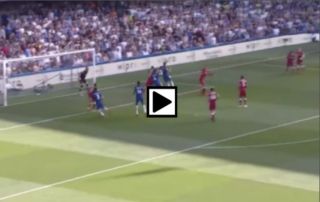 Olivier Giroud kept up his recent good form for Chelsea this afternoon, after the French international bagged a stunning header against Liverpool at Stamford Bridge.

With a lot of the pressure going against Chelsea before the goal, Giroud’s strike will give the Blues a big lift going forward in the rest of the match, and maybe the season.

The goal itself was a thing of beauty, with a cross from defender Victor Moses falling delicately onto the head of Giroud, who applied the finish to give Antonio Conte’s side the lead.

Giroud now has three goals in this last three games for the Blues, a run that should fill Blues fans with hope going into next season.

Only time will tell how big a goal this could be in Chelsea’s season, with the west London side still firmly in the hunt for the Champions League places in the Premier League following former Arsenal star Giroud’s goal this afternoon.

Here’s a clip of the goal in today’s match. If one thing’s for certain, there are many players in the country that are better with their head than Olivier Giroud.