A Real Madrid star is looking more and more desperate to complete a move away from the Bernabeu.

James Rodrigues is reportedly keen to complete a permanent move from Real Madrid to Bayern Munich.

The Colombian international embarked on a loan move to the Bundesliga and German Champions last summer and now appears to be ready to make the move a permanent one after enjoying his initial twelve months in Germany.

The Sun have reported that Bayern have an extremely modest clause to sign Rodriguez on a permanent deal in the preliminary loan contract for a fee of just £37m.

Alongside this, the report also indicates that Rodriguez has settled into life in Germany and now wants to remain at the club rather than return to La Liga under Zinedine Zidane. 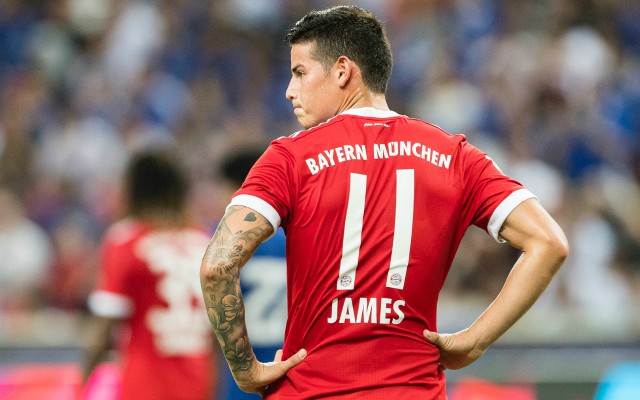 Real Madrid and Bayern Munich faced each other in the Champions League semi-finals last week with Bayern being knocked out by Zidane’s side narrowly after losing 4-3 on aggregate.

Rodriguez however did manage to make an impression on his parent club with the Colombian international registering a goal in the second-leg for Bayern which could have proved vital had the German champions gone on to win the tie.

It will now be up to Real to decide whether they will allow Rodriguez to complete a permanent deal to the Bundesliga for a fee that many would regard as a bargain.