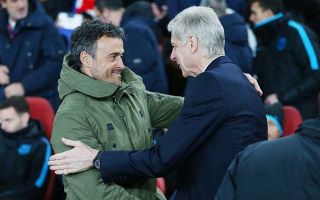 Given he’s been in charge for 22 years, Arsenal will have to be braced for a tricky transitional period when Arsene Wenger steps down at the end of the season.

The veteran tactician has had a major influence on the Gunners during his tenure, and so his successor will have a tough job on his hands to arrest their slide in recent years and ensure that they can return to competing for top four places and the Premier League title.

According to Sky Sports, Arsenal have identified two main targets to fulfil their expectations, and they are current Juventus coach Massimiliano Allegri, and former Barcelona boss Luis Enrique.

While it will remain debatable as to their chances of appointing either, it has to be said that Arsenal are certainly looking in the right place.

Allegri, 50, is on the cusp of winning his fourth consecutive Serie A title with Juventus, while he also won in 2011 with AC Milan to prove his credentials as one of Europe’s top coaches while he has also got to two Champions League finals.

As for Enrique, 47, he enjoyed a trophy laden spell with Barcelona, winning two La Liga titles, the Champions League and the FIFA Club World Cup and arguably is a better fit if also considering style of play and a culture at the club with Arsenal playing attractive football under Wenger.

In turn, it remains to be seen as to who can be convinced about taking the job, as Sky Sports add that both have reported reservations over the ‘management structure’ at the club.

Having both been so crucial in not only coaching their respective squads but perhaps also having an important voice in transfer strategies, it remains to be seen if taking the Arsenal job is an attractive proposal after all and if the north London giants will have to consider other options.