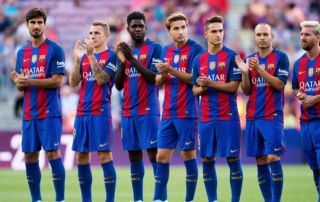 Barcelona midfielder Andre Gomes has struggled to entirely convince since joining the club in 2016, and fresh reports claim he could leave this summer.

As noted by BBC Sport, the Portuguese international joined the Catalan giants from Valencia in a deal worth around €35m after Euro 2016.

Expectations would have been high after he had impressed for club and country, but it hasn’t quite worked to plan since he linked up with his Barcelona teammates.

The 24-year-old has made 75 appearances for the club in almost two seasons, but at no point has he really enjoyed an extended run in the starting line-up as an established and key figure under either Luis Enrique or Ernesto Valverde.

As seen in the tweet below, Gomes wasn’t included in the squad to face Real Madrid in El Clasico on Sunday night, a game in which Barcelona were able to secure a 2-2 draw despite being reduced to 10 men in the first half after Sergi Roberto’s red card.

Nevertheless, it was another indication that they don’t particularly need Gomes as they kept their unbeaten streak in place and it seemingly raised further question marks over the former Valencia man’s future at the Nou Camp.

As noted by The Express, the latest snub has led to suggestions that the summer may mark the end of the Portuguese ace’s stay with Barcelona, with Man Utd and Tottenham specifically mentioned as potential destinations.

There’s no doubt that there is a technically sound and classy player in Gomes, but perhaps with a change of environment and a fresh start elsewhere, it could kick start his career again as it could be argued that he simply isn’t the best fit for Barcelona in terms of his characteristics and what is needed to suit the team’s style of play.