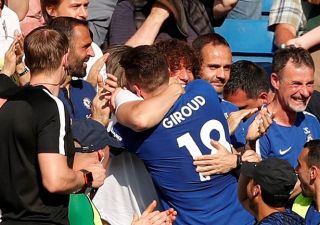 Chelsea secured a crucial 1-0 win over Liverpool at Stamford Bridge on Sunday, and match-winner Olivier Giroud has now explained his celebration with David Luiz.

The Frenchman scored the only goal of the game to keep Chelsea’s hopes of a top-four finish in the Premier League alive.

The Blues now trail fourth-placed Tottenham by just two points, while both sides have a game in hand on Liverpool who sit on 72 points in third place.

In turn, it sets up a potentially very exciting last day of the season to determine who qualifies, with the Reds possibly now even facing the task of having to win the Champions League in the final against Real Madrid later this month to qualify for next season’s competitions as holders.

Nevertheless, Giroud was the hero on Sunday for the Blues, but he opted to go straight over to Luiz after scoring and celebrate with the Brazilian who has found himself on the sidelines through injury and reported issues with Conte for most of this season, as noted by The Sun.

“David Luiz is a good friend, so I was very pleased to dedicate him this goal because he is going through a tough period and he is coming back,” he is quoted as saying by The Mirror.

It’s a nice touch from the Frenchman, one that his Chelsea teammate would undoubtedly have appreciated. Whether Conte enjoyed it as much is unclear as he told the media after the game that he hadn’t seen it.

Now though, they’ll all be fighting for the same goal and that’s to get the club into the Champions League for next season with just two games remaining. Further, they could certainly salvage a lot from this season as they’ll also face Manchester United in the FA Cup final later this month in their chance to also claim some silverware too.