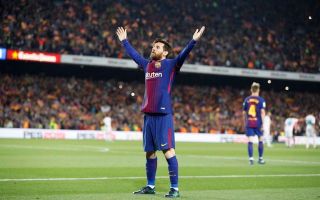 Barcelona preserved their unbeaten record in La Liga this season after a hotly-contested 2-2 draw with rivals Real Madrid at the Nou Camp on Sunday night.

Goals from Luis Suarez, Lionel Messi, Cristiano Ronaldo and Gareth Bale were just a few incidents in an action-packed encounter with pride still most certainly on the line even if the Catalan giants had already secured the La Liga title.

With so much to discuss, here are our five big talking points from the game:

While Ronaldo also got on the scoresheet, his scrambled finish ultimately wasn’t as good as this from Messi as he didn’t even look up before producing a brilliant strike which sailed past Keylor Navas.

However, both men deserve credit. That’s now a staggering 1,000 goals between them for Barcelona and Real Madrid in all competitions, with Messi edging slightly ahead having been at the Nou Camp longer with 551 goals.

As noted by BBC Sport, Bale’s future at the Bernabeu is a constant talking point. The Welshman has been blighted by injuries in the Spanish capital, but his trophy haul is sensational.

He did his best to remind Madrid what they’d potentially be losing if they did opt to let him leave this summer, producing this wonderful first-time effort to draw his side level again.

He’s evidently got it in his locker, but it will be down to producing consistently and avoiding injury setbacks it seems…

The Portuguese superstar picked up a knock as he scored Madrid’s first equaliser, and although he was able to continue, he was replaced at half-time.

With a date against Liverpool in the Champions League final in Kiev on May 26, the last thing Los Blancos will want to see is Ronaldo absent through injury.

As noted by Goal.com, Zidane eased fears to a degree, but it remains to be seen the extent of the issue. With 43 goals in 42 appearances this season, they’ll be desperate to see the 33-year-old lead their charge for another European crown.

In an emotional press conference last month, Andres Iniesta confirmed that he would be leaving Barcelona at the end of the season, as per ESPN.

As a result, this was the last El Clasico that the Barcelona legend will feature in and although it didn’t end in victory, he’ll be delighted to have helped take them a step closer to creating more history by going unbeaten all season.

Barcelona have three more games to go, but this could be a decisive result as Iniesta leaves having celebrating a domestic double with the Copa del Rey too.

As noted above, this could turn out to be an incredible season for the Catalan outfit. Ernesto Valverde’s first year in charge has been tainted somewhat by their Champions League exit, but he’s on the cusp of quite the achievement.

With two trophies already secured, the focus will be on finishing unbeaten this year and having fended off Madrid despite being reduced to 10 men after Sergi Roberto’s red card in the first half, this was a potentially fundamental result.