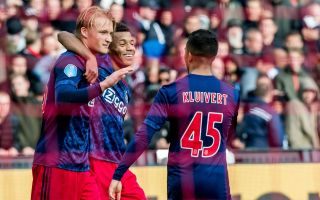 Having impressed with Ajax in the early part of his career, youngster Justin Kluivert has reportedly earned the attention of some Serie A heavyweights ahead of the summer.

The 19-year-old enjoyed a breakout season last year, scoring 10 goals and providing 18 assists in 42 appearances across outings for both the youth team and senior side.

He also gained valuable experience of playing in Europe during Ajax’s run to the Europa League final, while he’s continued his progression with 11 goals and five assists in 36 appearances this year.

An exciting young talent with pace, creativity and an eye for goal coupled with versatility to be played in various attacking positions, it’s no surprise that he has attracted interest.

As reported by Fox Sports, AC Milan, Roma and Juventus are all seemingly keen on the idea of signing him, and it’s no wonder considering that he would potentially address key weaknesses in their current squads.

The Rossoneri in particular are lacking pace and width in their current set up with Gennaro Gattuso having to heavily rely on Hakan Calhanoglu and Suso. While the pair are technically gifted, they aren’t able to shift through the gears to offer a different dynamic.

Juventus arguably have that in Douglas Costa and Federico Bernardeschi already, while Roma have Diego Perotti and Cengiz Under to offer quality in wide positions.

Nevertheless, the report would suggest that all three Italian giants are keen on Kluivert, but time will tell if he decides that a move away from his homeland is a sensible call at this stage of his career.

With regular playing time for the Eredivisie giants to continue to develop and improve, there is a strong argument to suggest that he’s better off staying where he is for the time being. Time will tell if that’s what he opts to do.