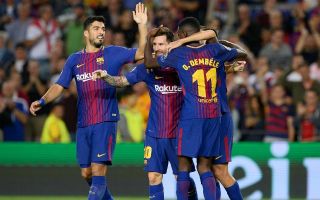 Barcelona coach Ernesto Valverde has ultimately suggested that Ousmane Dembele won’t be leaving amid speculation linking him with Liverpool.

The 20-year-old has had a difficult first season at the Nou Camp, as injuries and lack of form have held him back from making a positive immediate impact.

Having managed just two goals and eight assists in 20 appearances in all competitions, that tells its own story about his struggles adjusting and adapting to Barcelona’s style of play and finding his feet alongside the likes of Lionel Messi and Luis Suarez.

As noted by SFR Sport, Liverpool had been linked with making a loan move for the youngster with an option to buy, with Jurgen Klopp potentially looking to add quality and depth to his squad as he’ll look to compete on various fronts next season to win major honours.

Dembele would certainly have added to the quality already at Anfield with the likes of Sadio Mane and Mohamed Salah, but it appears as though Valverde has little interest in seeing Dembele leave after just one season with his squad.

“He’s an incredible talent, technically outstanding, he’s quick, a difference-maker,” he is quoted as saying by FourFourTwo, who add that Barcelona splashed out €105m for the French international last summer.

“Maybe he needs to work on defence a little bit and some other areas. Maybe putting on pressure after we lose the ball. But we know he’s young, he’s had a tough season and we hope he will continue to develop next year.”

That sounds as though Valverde is keen to continue to work with Dembele and help him fulfil his talent in a Barcelona shirt, thus dismissing Liverpool hope of seeing him at Anfield next season.

While they do have plenty left in the tank, as seen this season in leading the way in Barcelona’s domestic double, both Messi and Suarez are on the wrong side of 30 now and so Dembele will surely hope to emerge as a pillar of the club’s future plans if he can overcome the early teething problems.