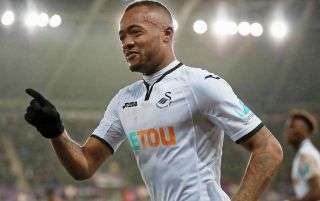 Swansea host Southampton tonight in what will be a crucial match in the race for survival.

Stoke City became the first side to drop to the Championship after they were defeated by Crystal Palace on Saturday.

Swansea host Southampton are separated only by Southampton’s better goal difference, however, the Saints will be kicking themselves after gifting two points late on in Saturday’s 1-1 draw at Everton.

Swansea face Stoke in the final match, whilst Southampton come up against champions Manchester City – so this match will be vitally important to Saints’ manager, Mark Hughes.

When is Swansea vs Southampton and what time is kick-off?

The match takes place on Tuesday, May 8 at the Liberty Stadium.

The game is being shown on Sky Sports Premier League, Main Event and Ultra HD, where coverage will start at 7pm.

Swansea are still without long-term injury absentees Wilfried Bony and Leroy Fer for the match but have a full choice of players available to choose from.

Mark Hughes will be without the suspended Maya Yoshida after picking up two bookings on Saturday, while Mario Lemina is a doubt having come off with a hamstring problem at Everton.