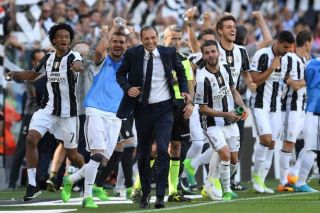 Massimiliano Allegri has done a stellar job since taking over at Juventus in 2014, but speculation is now linking him with a new challenge at Arsenal.

The 50-year-old is on the cusp of a fourth consecutive Serie A title with the Turin giants, while they’ll look to do a fourth straight domestic double too with the Coppa Italia final on Wednesday night.

In turn, although he has fallen agonisingly short in the Champions League final on two occasions in the last three years, there is no doubting his pedigree at the highest level and his ability to consistently deliver success as he also won a Scudetto with AC Milan in 2011.

As far as top coaches in Europe go, he’s certainly up there with the best, and while he continues to be linked with the Arsenal post this summer, as noted by Sky Sports, he has revealed that he will sit down with the Juve hierarchy at the end of the season as always and discuss plans moving forward.

“I have a great relationship with the club and we are in total sync which is being demonstrated in the last four years,” he is quoted as saying by Sky Sports.

“So when it is all said and done we will sit at the table and plan the future as we have always done with a clear mind.”

Allegri is seemingly not giving anything away at this stage, as while he continues to lead Juve to major honours, there could be a strong argument to question the sense in leaving the club at this point.

With Arsene Wenger set to leave Arsenal after 22 years at the helm, that’s a tough job to take on as there will undoubtedly be a tricky transitional period as the Gunners adapt to change and so it will be a real test of Allegri’s qualities as a manager.

That may well be a challenge that he’s looking for, but time will tell if he opts for north London next season or if Juve can keep hold of him and continue to enjoy great success during his tenure.