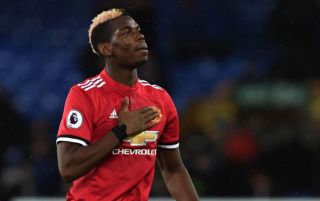 It hasn’t been a straight-forward campaign for Man Utd midfielder Paul Pogba, but he is seemingly reflecting on it with a positive outlook.

The French midfielder has had his highs and lows over the course of the season. From his double against Manchester City at the Etihad to being substituted off early in games by Jose Mourinho as he seemingly struggled to have a positive influence.

Coupled with his £89m price-tag that United splashed out in 2016, as per BBC Sport, expectations have been high over the French international’s impact on his return to Old Trafford, and overall, it could be argued that he has failed to reach the expected level on a consistent basis.

The 25-year-old has scored six goals and provided 12 assists in 34 appearances in all competitions, but perhaps it’s unfair to judge him on those figures. However, it’s questionable as to whether he’s done enough in general to avoid criticism.

Whether that’s his issue in not being able to adapt and stamp his authority on games or Mourinho’s inability to get the best out of him or play him in his most effective role, it could be down to a whole host of reasons.

Nevertheless, he is seemingly content with his contribution this season, but it appears as though receiving the captain’s armband has been a major plus point for him as he has specifically reflected on that with happiness.

“It’s good that the manager believes in you, and the players,” he is quoted as saying by the Manchester Evening News. “It’s an honour to wear the captain’s [armband], and just to wear the shirt and play at Old Trafford. I was here in the Academy and for me it was a dream to play for the first-team, and I did it.

Perhaps he is judged to a different standard, but it will be down to Pogba to improve and develop further next season to ensure United can bridge the gap to rivals Manchester City in the Premier League title race and improve on their showing in the Champions League this season and emerge as captain material on a more regular basis.