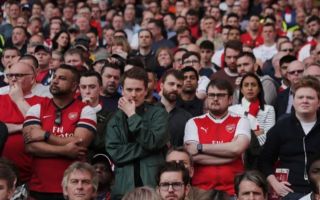 Arsenal fans took to twitter this evening to express their outrage at one star in particular and even suggested he should be sold.

Arsenal fans want Alex Iwobi to be sold by Arsene Wenger’s replacement this summer after his performance vs Leicester City.

Arsenal fell to defeat at the King Power Stadium at the hands of Leicester City. The night took a disastrous start for Arsene Wenger’s penultimate ever fixture as Arsenal manager. After just fourteen minutes Kelechi Iheanacho scored an opener for the Foxes with Arsenal defender Konstantinos Mavropanos being sent off for Wenger’s men just one minutes later after the opener.

Pierre-Emerick Aubameyang then equalised for Arsenal on the 53rd minute in the second-half but Jamie Vardy and Riyhad Mahrez goals sealed a 3-1 victory for Leicester City.

A number of Arsenal stars fell short of the standard required tonight but Alex Iwobi was the main scapegoat singled out by Arsenal fans.

Iwobi squandered a chance in the first-half and looked out of ideas throughout.

The Nigerian international was then pulled from the action by Arsene Wenger with the French manager bringing off a dejected Iwobi to be replaced by Edward Nketiah.

Many Arsenal fans suggested that whoever comes in to replace Wenger should look to sell Iwobi from the club immediately.

Please can the next Manager sell Iwobi ???

Hope the new manager will sell Iwobi and welbeck next season

Iwobi is up there with our worst ever players. Awful footballer #AFC

Awful from Iwobi. His shot is still in flight and may land at Heathrow en route Nigeria.

#LEIARS Iwobi worst #arsenal player ever.. Even worse than #welback