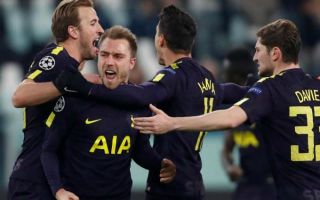 Tottenham host Newcastle in the Premier League tonight looking to secure a place in the Champions League.

Spurs suffered a shock 1-0 defeat to West Bromwich Albion at the Hawthorns last Saturday and Chelsea’s 1-0 win over Liverpool leaves the Blues just two points behind them with two games to go.

Newcastle head to Wembley on Wednesday night, with the Magpies sitting safe in 10th place, however Rafa Benitez’s men lost 2-1 to Watford at the weekend.

The pressure is on Mauricio Pochettino’s team knowing that Champions League football will be secured should they win their last two remaining games.

Harry Kane will be looking to add to his Premier League goals tally of 27 and could equal sixth-placed George Hunt (138 goals) in Tottenham’s all-time leading scorers list.

When is Tottenham vs Newcastle and what time is kick-off?

Tottenham host Newcastle at Wembley with kick-off scheduled for 8pm on Wednesday, May 9.

Is Tottenham vs Newcastle on TV and is there a stream?

Mousa Dembele (ankle) could return to the side but Serge Aurier (thigh) Eric Dier (ill) are less likely to feature.

Jan Vertonghen will be available for selection despite going off at West Brom on Saturday.

Harry Winks remains out with a long-term ankle problem.

Islam Slimani is suspended for Newcastle, while Ciaran Clark is a doubt.

Meanwhile, Christian Atsu (knee) is out for the season.