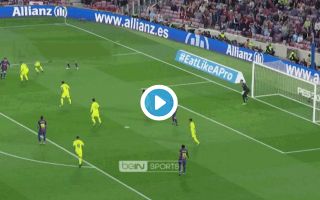 In what could be one of his final games for Barcelona, Andres Iniesta produced a memorable performance including some outrageous link-up play for a Lionel Messi goal.

After officially announcing last week that he would be leaving the Camp Nou, Andres Iniesta has tonight rolled back the years with a vintage performance evocative of the class and quality he has produced on a regular basis throughout the last decade.

Paulinho then doubled Barca’s lead on the 16th minute as the La Liga champions took ahold of the the league clash inside just 20 minutes.

Barca then went on to execute a typical performance in the first 45 minutes giving Villarreal little chance to carve out any chances.

The standout star was inevitably Iniesta with the Spanish international and World Cup winner commanding the game with ease form the heart of the Barca midfield.

Iniesta then personified his performance with a typically classy and outrageous assist just before half-time.

The Spaniard played a quick one-two on the edge of the box with Lionel Messi and produced a sublime chip to play the Argentine magician in on goal to score Barcelona’s third goal on the 45th minute.