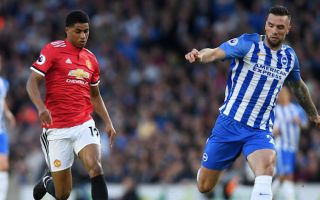 The hosts are safe in the Premier League after they put in a superb performance against Leicester on Saturday to win 2-0, with goals from Joao Mario and a brilliant strike from captain Mark Noble.

In contrast, it was a miserable trip to Brighton for Manchester Utd as they succumbed to a 1-0 defeat.

Manager Jose Mourinho was particularly unhappy with the performance of some of his players he started with, so there could be a number of changes made to his side.

When is West Ham vs Man Utd and what time is kick-off?

West Ham host Manchester United at the London Stadium with kick-off scheduled for 8pm on Thursday, May 9.

Romelu Lukaku is a doubt for the trip to West Ham after being injured from a challenge by Arsenal’s young Greek defender, Konstantinos Mavropanos during Utd’s 2-1 win over Arsenal, according to The Sun.

Alexis Sanchez also didn’t play against Brighton as he was carrying a slight knock but the Chilean should be available again in time to face David Moyes’ side, according to Goal.

Goal also said that Moyes will be hopeful that top scorer Marko Arnautovic will be fit after he was replaced as a precautionary measure during the win at Leicester.